Early in the morning of January 23rd, rock debris from construction damages an existing retaining wall and the road surface resulting in a Tofino highway closure. This also affects access to Ucluelet and the Pacific Rim Park.

The most timely updates on the Tofino Highway Closure can be found on the Drive BC Website.

As of 10 am on January 24, 2020
[Truncated] Highway 4. Roadway obstruction between Toquart Bay Rd and Nahmit FSR; Upper Taylor Main FSR (14 km east of Southern Boundary of Pacific Rim National Park). Highway 4, in both directions closed at Kennedy Lake due to compromised road structure. Highway will reopen to essential travel only Noon-8pm today, Jan 24. Travel will be restricted to passenger vehicles & light pickups only. Vehicles will be screened at the Tofino/Ucluelet junction and at Sproat Lake and larger vehicles will be turned back. 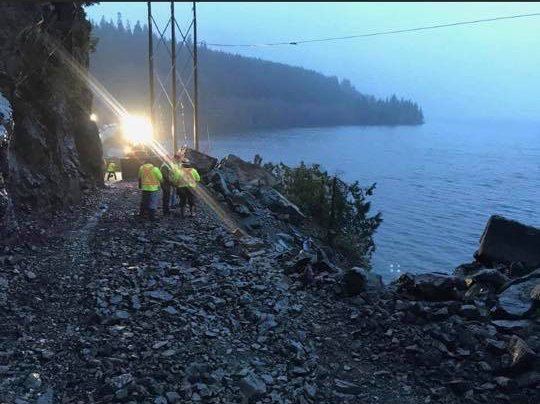 CTV News
The Western Vancouver Island communities of Tofino and Ucluelet will remain cut off from the rest of the island overnight after an early-morning rockslide closed Highway 4 in both directions.

The obstruction is at Kennedy Lake, roughly 15 kilometres from Ucluelet, where construction crews have long been working to upgrade the precarious highway pass.

The B.C. Ministry of Transportation says that crews were conducting a scheduled controlled blast in the area, which resulted in a “larger than anticipated rockfall” spilling onto the road.

Global News
The Vancouver Island communities of Tofino and Ucluelet found themselves without road access on Thursday, due to a “major road failure” on Highway 4.

DriveBC says the road is closed in both directions at Kennedy Lake due to the blockage.

The Ministry of Transportation said the failure was a result of an accident during construction on the highway.

“During a scheduled blast overnight at the Highway 4/Kennedy Hill Safety Improvements project, rockfall from the blast resulted in a failure of the road,” said a ministry spokesperson in an email.

If you are stuck on the Tofino side of the closure and looking for accommodations Habitat is a cool vacation rental with hot tub near Tofino, Hunker down and have a soak with us.